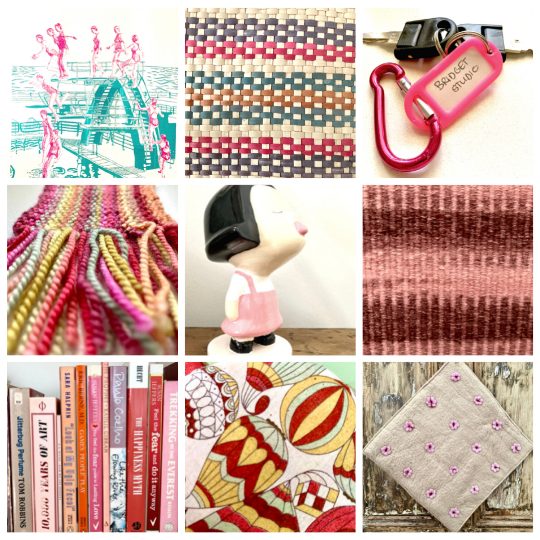 Pink is our colour theme for the month of February. And yes, it’s linked to Valentine’s Day, although technically that should make it red. But mostly that’s just a starting point to think about the colour in a more open minded way.

What colour is pink? Well, you can think of it as just a faded shade of red. Or you could start from primary colours and build it up. It comes in shades ranging from nude to fuchsia and everything in between. When you think pink what adjectives or colour descriptors come to mind?
Pastel, powder, shell, champagne, blush, rose, candyfloss, baby, ballet, dusty, faded, salmon, coral, flamingo, bubblegum, carnation, watermelon, raspberry, cerise, shocking, hot!

Pink became a very gender-defining colour in the late 20th century in western culture. Supposedly, pink is for girls and blue is for boys. And there is plenty of evidence to support these stereotypes. Just walk into any children’s store and look at baby clothes, accessories and toys. But it wasn’t always this way.

According to Kassia St Clair, who wrote “The Secret Lives of Colour” ”It is, after all, just faded red, which in the era of scarlet-jacketed soldiers and red-robed cardinals was the most masculine colour, while blue was the signature hue of the Virgin Mary.”
It was first used as a colour name in the late 17th century, and likely was named after the Dianthus flower, also known as a “pink” And its first appearance in the Oxford English Dictionary was at the same time, to describe pale red.

Pink has been a political colour since the 1920s, when Time magazine coined the term ‘pinko’ for anyone thought to have communist, socialist or ultra liberal-leanings. Perhaps this was connected to the “red” communists of the Russian revolution.
It became the colour of activism in 2020s with the pink hat march on Washington.
Did you knit one? Did you march?
The colour was part of a feminist response to old-fashioned sexism. So it isn’t called “shocking pink” for nothing.

Whatever your politics there are plenty of ways to chose a rosy hue for your crafting project. We have a range of pink yarn shades in all our yarn bases. And our most popular multi colour is Happy Days, which definitely fits the pink theme!
And there are lots of swatch images in our online shop that illustrate the effect of combining different yarn colours. So you can get a shade that suits your preference, whichever way that leans!